Here I am at the very start of everything. It’s the comic book creator’s equivalent of that moment you bust open your new video game box, and after flicking through the instruction manual, slap the game into the console and launch the game. It feels like I’ve finally pressed start on this new project, and slowly this comic is going to be played to completion.

A good eighteen months since my first graphic novel Filmish came out, and here I am back again at the beginning, about to launch into another graphic journey, this time into the fascinating history of gaming. Specifically, video games.

Games have always fascinated me, but in a very different way to films. Games were always a little bit more out of reach for me. My older brother had a Spectrum ZX, later an Atari, and I would watch over his shoulder as he battled goblins in Golden Axe or dodged death in Mousetrap. I was too young to ever be that good myself, always taking great pleasure in the anticipation of play and then great disappointment when the game swiftly dispatched me and it was my brother’s turn again.

As I got older, there were rarely consoles in the house, but always at my friends’ houses. It made games all the more appealing and mysterious. I could never master them like others my age, never obsessively complete the games again and again, but I was still hooked. I’d go home, playing through Goldeneye levels in my head, leaning into corners like in MarioKart.

As a teenager, games became everything for a while. We’d play through Half Life together, squashed round a 14in monitor, each friend taking a key or button, allowing us to control Gordon Freeman by hive-mind. We’d mod up Operation Flashpoint and Quake, creating our own sound-effects and game modes.

I got my first console, finally, at the age of 22. And here I started to engage more with the world of gaming – seeing perhaps for the first time the true potential of games as an artform. I’d play for hours on end, making the most of the freedom afforded by my mid-twenties. 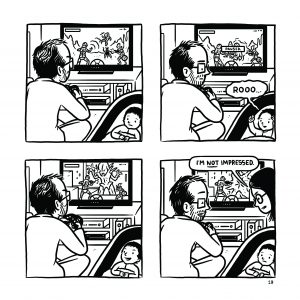 A few years later my gaming life got derailed by the birth of my son, and life took over. At first I’d try to sneak in cheeky sessions during naps, or after an abrupt 4am wakeup, but the dedication to regular gaming soon subsided.

But the passion remained. Even through the busy job of raising two kids and creating my first graphic novel, it remained. And now, ready to work on my second graphic novel, an exploration of this amazing medium seems perfect.

Games are at a key moment in their history – a tipping point where they are now finally being recognised for their huge and varied potential. Games are a major part of human life, and have always been with us – from their origins at the dawn of humankind through to the invention of video games and the evolution of the artform we know today. Like in my previous book, Filmish: A Graphic Journey Through Film, I’m going to use this book to explore all manner of interesting angles on my subject – looking at how games shape our understandings of race and gender, how they allow us to better understand the world we live in, and how they can change our lives for better or worse.

This blog will run throughout production of the book, giving an insight into where I am at in production, what cool things I’ve been reading about, and maybe offering some reviews and recommendations of games I’m playing.